A Disgraceful Anniversary: 5 Years Ago, Europe Ended on the Vilnius Summit 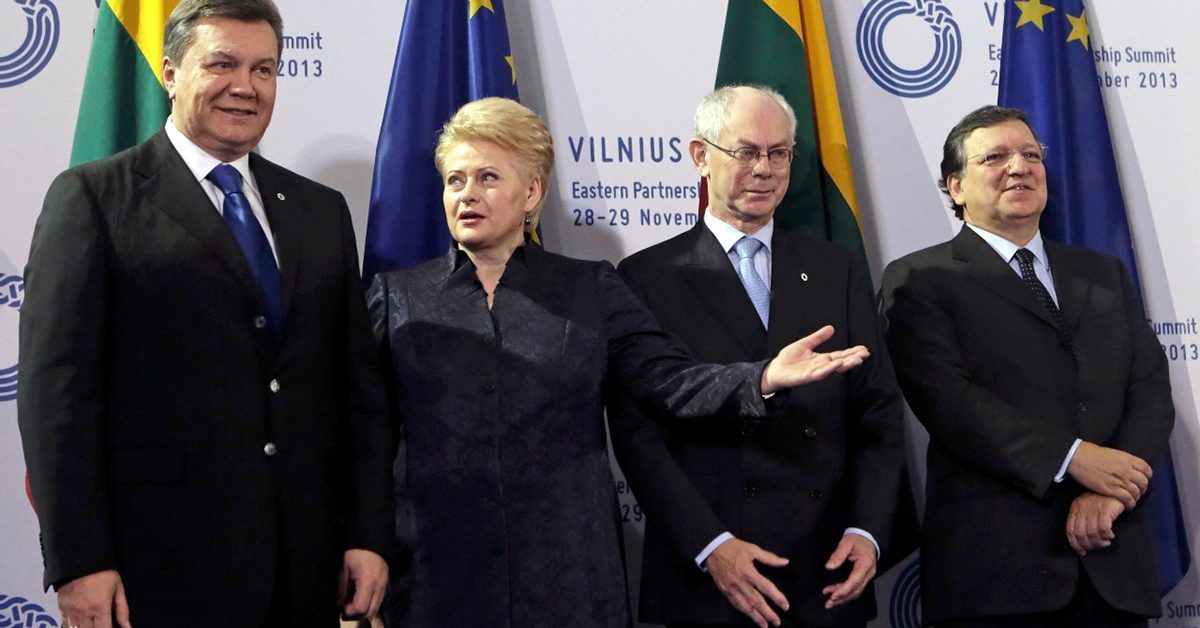 It has been five years after the Vilnius Summit of the Eastern Partnership, where the EU Association Agreement with Ukraine was –not- signed. The prospect of EU Association was the set-up to the Ukrainian Crisis, and the Eastern Partnership Vilnius Summit was the trigger. However, this was not just a fateful event for Ukraine: The Vilnius Summit was the beginning of the end for modern Europe, which first made its values into a religion and then showed its complete hypocrisy.

The majority of Western publications and statements on Ukraine are marked with a historic lobotomy. Be it in scientific monographies, press articles or the speeches of politicians – they all parrot the axiom that the Ukrainian crisis started with “The Annexation of Crimea.” Before “The Annexation of Crimea,” seemingly, nothing was happening with Ukraine, and the crisis only began with “Russian Aggression.”

Most commentators in Europe are incapable of making the elementary connection between the state coup in Kiev as the cause and the Crimean referendum and its secession from Ukraine as a consequence. Or they just don’t want to. All analytical thought is turned off with the Donbass issue as well: the respectable experts see no connection between the Euromaidan that overthrew the power of the “Donetsk team” and the start of mass protests in Donetsk.

However, the West is very clear on its reasons for the Revolution of Dignity: Ukrainian president Viktor Yanukovych refused the sign the EU-Ukraine Association Agreement at the Eastern Partnership Vilnius Summit. However, even here, the Europeans have bad memory.

Europe is desperately trying to -not- recall that up to the last week before the Vilnius Summit, there were no talks of Yanukovych not wanting Ukraine’s association with EU, but instead talks of Europe not wanting to associate with Ukraine.

It wasn’t Europe who was asking Yanukovych to sign the Association Agreement, but Yanukovych was asking Europe. It was not the Ukrainian government, but Europe who were against growing closer with Ukraine, because this country did not match up to the Europeans’ views of their values.

The Füle List, Homework for Ukraine, European Reforms – no one remembers these keywords of 2013 spoken by everyone when discussing Ukraine’s Euroassociation. The European Union was placing strict conditions on Kiev, and only upon their completion the EU would sign the Association Agreement with them.

The Europeans have stated a fact: Ukraine is a non-democratic corrupt country behind on rights, so in order to grow closer with Europe they have to work for it. The EU was demanding that Kiev conduct a constitutional reform, change the election laws, conduct structural reforms of the court and law enforcement systems and free political prisoners, headlined by former Prime Minister Yulia Timoshenko.

These demands were dubbed Homework for Ukraine and the Füle List – named after Štefan Füle, then European Commissioner for Enlargement and European Neighbourhood Policy. Initially the Füle List had 19 requirements for Ukraine’s association with the EU, then it was 11, then it was dropped to 5; right before the Vilnius Summit, the Europeans trimmed it down to just one demand – to free Yulia Timoshenko from prison.

It ended with Yanukovych throwing out all of the Europeans’ demands and on the Eastern Partnership summit on 28-29 November, the leaders of the 28 EU countries…no, they did not tell him to stay away from Europe, instead they begged him to sign the Ukraine-EU Association Agreement well into the night.

The “policy of values” ideology was cruelly and mercilessly violated in Vilnius. Dozens of presidents, PMs and chancellors, who made their careers in politics with talks of values, were groveling before a man who intentionally rejected their values. Before the trip to Lithuania, they called him a bandit, and afterwards – a dictator.

The Vilnius Summit is an unprecedented fiasco of European politics. A fiasco in terms of image and morale. And thus it brings its disgrace

And this disgrace was made possible because all other notions of signing or not signing the Association Agreement with Ukraine (common sense, corresponding to values, economic sensibility and social risks of Association with Ukraine) were phased out with the logic of “Containing Russia.”

First, this logic was marginal and peripheral. It was adopted only by the Eastern outskirts of the European Union – Poland and the Baltic countries. Gradually through the EU institutions, chiefly thanks to Lithuania’s presidency in the EU Council in the second half of 2013, the idea of “Containing Russia” shifted from the sidelines to the mainstream of European political thought.

Europe stopped seeing Ukraine as something with inherent value outside of its border with Russia, where it would matter whether or not Ukraine has political prisoners, adheres to human rights, has an independent court or if the president’s closest entourage is corrupt.

Lithuania as the presiding country instated its point of view, where Ukraine was the prize in a geopolitical game between the West and Russia, who were pulling it in opposite directions in hope of gaining influence. With that approach, it was no longer important if the country was democratic or not, corrupt or not – any means were allowed in Ukraine and exonerated by being part of “Containing Russia.”

So our “enlightened” Europe supported the Maidan, the Ultra-Right militants with Molotov cocktails, the state coup, the “garbage lustrations,” the glorification of Nazis, the armed solution to the Donbass conflict, the burning of innocents at the Odessa Trade Union House. Turning a blind eye to all of that and looking for excuses for the Maidan activists and the new Kiev regime was politically sensible, because it made sense in the logic of “Containing Russia.”

This Geopolitical game led to disaster in Ukraine. But the betrayal of their own ideals was not without consequence for the Europeans. Five years later, it is clear that the Vilnius summit was a turning point.

After the all-European disgrace in Lithuania, for the first time the destruction process of Europe’s values and mentality showed itself. And in recent years, this has led to a recurring crisis in the EU with the ruling elite of the main European countries losing power and authority.

In this story with Ukraine and Yanukovych, we can clearly see how the European politicians have fallen: their complete lies, hypocrisy and double standards. It would be strange to assume that during the Vilnius Summit they were possessed by some demon while actually always being sincere, honest and adherent to European values. They have the same hypocrisy back home: politically correct smiles and talks of tolerance with a vested interest hidden in the closet. And everyone sees it.

That is why Europe has had its “populist uprising” recently. Elections and referendums have voters ditching the current lying elite in favor of the scandalous and the marginalized.

In spring of 2018, the Italians voted in the satirical showmen, who parodied politicians of the system. In Germany, the outrageous Alternative for Germany is getting more votes while the “people’s parties” of CDU/CSU and SPD are losing the respect of the nation. The Brits voted for the UK to leave the EU to spite Brussels and its “values.”

Europe is in an unending crisis of trust, solidarity and similar things tied to the legitimacy of political powers, because their policy of values turned out to be a policy of hypocrisy.

And this was best seen in Lithuania at the Eastern Partnership Vilnius Summit.