Scared of Hitler. Why the West Turned Down an Alliance with Moscow 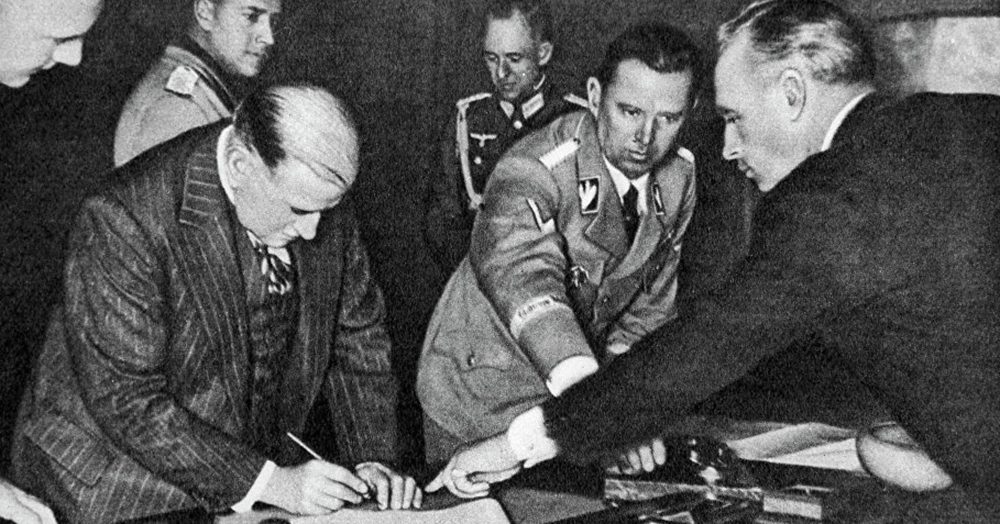 Источник изображения: sputnik-news.ee
Scared of Hitler. Why the West Turned Down an Alliance with Moscow

The West is pushing a myth of the Soviet Union and the Third Reich conspiring to divide up Europe. And obviously, they downplay the fact that the UK, France and Poland were appeasing Nazi Germany for a long time and turned a blind eye to its aggressive actions. And the same time, the Soviet Union was sounding the alarm, trying to form a pact with the European leaders, that would guarantee help in case of German aggression. Why the Western politicians ignored the USSR’s suggestions is shown in the recently declassified documents “On the eve of Munich and after. Archive documents tell all. Munich Agreement 80th anniversary.”

The Soviet Union viewed the Munich Agreement, that let Germany attack Czechoslovakia, on one had as a devastating blow to joint European security policies, on the other hand, as an example of the USSR’s isolation. Also, the Soviet Union was one of the few states who spoke against Hitler’s attack on the Czech.

So, in response to the German invasion into Czechoslovakia in March 1939, the Soviet People’s Commissar for Foreign Affairs Maxim Litvinov sent out a note of protest, according to which the Soviet Union refused to recognize the addition of Czechoslovakia to the Third Reich as “legal and in accordance with international law.”

“With the absence of any kind of expression of the will of the Czech people, the occupation of the Czech lands by German forces and the consecutive actions of the German government can’t be seen as anything other than frivolous, violent and aggressive.” (18 March 1939)

Reichschancellor A. Hitler in Prague. March 1939 /Photo: 1939.rusarchives.ru
Throughout 1939, the USSR conducted many attempts to sign an agreement with Great Britain and France. The core of Stalin’s suggestions was the following:

“England, France and the USSR will enter an agreement for 5-10 years on a mutual obligation of various aid to each other, including military aid, in the case of aggression in Europe against either of the states in the agreement.”

In addition, these countries “oblige to deliver various aid, including military aid, to East European countries between the Baltic and Black seas…” The crux of the suggestion was the principle of equality and mutual aid with no one-sided guarantees.

And every time the Soviet diplomats were met with the European politician’s aversion to making concrete decisions. And this is unsurprising, as the British MFA’s policy was to not make any deals with the Soviet Union, but still keep it around for talks.

France was wholly going along with the British course. However this diplomatic strategy had a significant flaw: the people in Moscow were not as naïve as the West thought.

UK Secretary of State for Foreign Affairs Edward Wood, 1st Earl of Halifax and his French colleague Georges Bonnet needed the USSR to take on one-sided obligations, according to which Moscow would step in to protect Poland, Romania and the Baltic states or it would maintain a “favourable Soviet neutrality” while shipping weapons and resources to the countries facing German aggression. In exchange, they offered nothing to the USSR.

Stalin said that the Western stance on this all was “just empty words.” USSR Ambassador to UK I.M. Maysky when talking to British Foreign Minister declared that “The Soviet government trusts actions, not words.”

In May 1939, USSR MFA Vyacheslav Molotov met with British and French ambassadors and criticized their foreign policies, pointing out that neither London, nor Paris were interested in forming an effective alliance against the aggressor and were just engaging in empty banter. The status of the Western diplomats sent to Moscow in 1939 clearly shows their views on any negotiations with the Soviet Union. The Soviet delegation included the upper military staff, among them were People's Commissar for Defense of the Soviet Union Kliment Voroshilov, as well as the Chief of the General Staff, his deputy and commanders of the Fleets and Air Forces. All of the meetings would be recorded and sent to Stalin and Molotov on the same day.

In turn, the British delegation was led by Admiral Sir Reginald Plunkett-Ernle-Erle-Drax. As an indication of the low priority the Allied governments put on the mission, the delegation was sent by sea. Drax did not have any power to make decisions without the approval of the British government, rendering him next to powerless. And France only sent one member of the Grand Quartier Général Joseph Edouard Aimé Doumenc.

Title: The participant list of the French and British military missions during the talks in Moscow. 11 August 1939./ Photo: 1939.rusarchives.ru
In this situation, there was not a shadow of a doubt that the leaders of the Western countries found it more prospective to negotiate with the “European” Hitler rather than the “Bolshevik” Stalin. Why did this happen?

The archives show that British PM Neville Chamberlain and his French colleague Édouard Daladier were scared of Hitler like the fire and were underestimating the Red Army, viewing it as weak, while seeing the German Wehrmacht as undefeatable.

Simply put, the states that fight for European democracy were led by cowards who let World War II start up in front of them. Now the descendants of these “brave heroes” blame all of this on Stalin, calling him no less than a “Soviet Hitler.”

From the letters of UK Prime Minister Chamberlain to his sister:

“If we do end up signing this agreement, then I assume many, and first of all myself, will agree that this cannot be viewed as any big victory. I rank the Russians’ capabilities precisely as low when compared to how high I rank the Germans. I think that they may fail us at our most crucial moments, even the negotiations themselves have already confused some of our friends. I am a proponent of a much harder approach when dealing with them on any matter.”

“…Moreover, Russia is seen with discontent and suspicion by the majority of the smaller states, especially Poland, Romania and Finland.* Thus our close cooperation with them may cost us the sympathies of those who could give us actual aid if we managed to keep them on our side.”

*Romania and Finland were on Hitler’s side at the outbreak of World War II. RuBaltic.Ru note.

“…we must not forget of the effect this may cause on Mister Hitler’s thoughts, to see our willingness to kneel in front of the Russians is search of their support. Hitler already has a rather low opinion of Russia and our actions may only reinforce his opinion of us as a weak and soft people.”

The USSR also tried to convince London and Paris to pressure Warsaw into a joint agreement.

But the Polish establishment, being anti-Soviet and Russophobic, was categorically against talks with the Soviet Union.

Józef Piłsudski’s successor, Polish marshal Edward Rydz-Śmigły said “Even if the Germans are our enemy, they are still Europeans and men of order, while the Russians to the Poles are a barbaric, Asian, destructive and corrosive force of nature, any contact with it will turn to evil, and any compromise would be suicide.”

We should also add the thoughts of Poland’s Minister of Foreign Affairs Józef Beck: “If the British guarantee to Poland is a measure against war, an alliance with Russia is a measure to start war.”

Not all European politicians shared this anti-Soviet stance. Many people had foreseen the course of events, but sadly, they were not the ones to decide the direction of European diplomacy. The French Military Attaché in Moscow, General August-Antoine Palasse on 13 July 1939 wrote a secret repoty to the French Prime Minister: “The concern and distrust that appeared during the talks will only disappear when we have concrete agreements,” the Russians were ready to send up to 100 divisions against the Germans and asked for a Polish corridor for them to pass and “…we should immediately come into contact with the Soviet General Staff, prepare the Poles’ attitudes <…> to accepting our proposals.”

Palasse warned: “…if we don’t reach an agreement fast then we will see the USSR first isolate itself by taking a neutral wait-and-see position, and then will have reached agreements with Germany based on the division of Poland and the Baltic states.”

A month after the talks fell through and after the Molotov-Ribbentrop pact was signed, Voroshilov told the French Military Attaché General Palasse everything he thought of the talks in August 1939, putting diplomatic etiquette aside. “We genuinely wanted to reach an agreement with you, but you put us in a foolish position.”