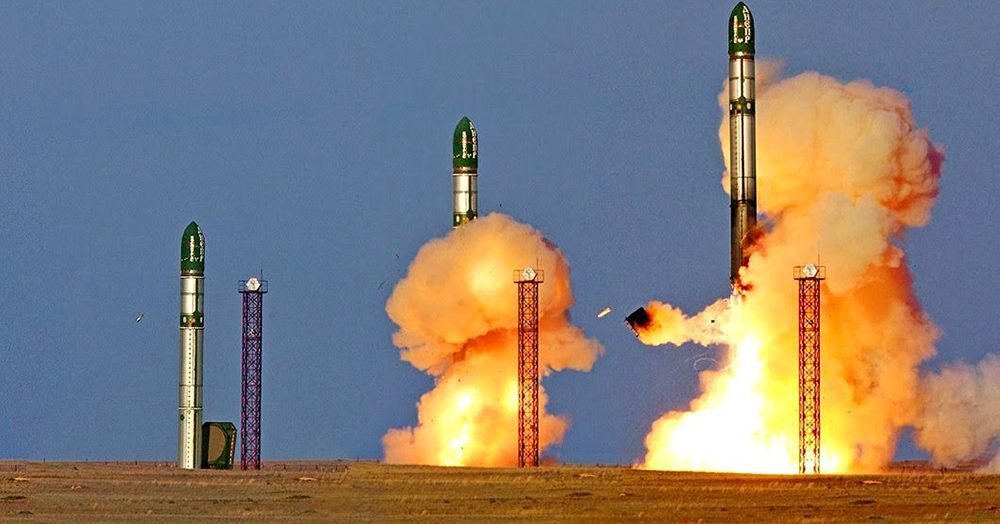 May 2018, the respectable European Leadership Network published a report on the rather relevant topic – the Russia-US disagreements over the Intermediate-Range Nuclear Forces Treaty (INF Treaty).

Current disputes around the INF Treaty have intensified a little over a year ago. The trigger was the New York Times article that accused Russia on 14 February 2017. Allegedly Moscow is not testing a land-based missile of the banned range (this was mentioned during the Obama administration, albeit in more reserved terms) but also the serial production of a mobile complex with this missile, which USA designated SSC-8. In another allegation, during Winter 2016/2017, the army received two brigades with the new missile complexes. It was soon obvious that the article was the first shot of the informational barrage, so in two more days, showing surprising expediency, initiative groups of legislators from both congressional bodies put forth the INF Treaty Preservation Act. After intense discussions and regular media accusations of Russia, the law (albeit weakly) included the 2018 Fiscal Year National Defense Request, and president Trump signed it in December 2017.

Note: The Intermediate-Range Nuclear Forces Treaty (INF Treaty) was signed on 8 December 1987 by Mikhail Gorbachev and Ronald Reagan. The INF Treaty was the culmination of the decade-long Euromissile Crisis – one of the tensest moments of the Superpowers’ confrontation at the end of the Cold War. The most apparent sign of this crisis was the deployment of the Soviet Pioneer (SS-20 Saber) missile complexes on one side and Pershing-2 missiles on the American side. These mid-range ballistic missiles were capable of destroying key sites of their opponent’s military infrastructure, including command centers and HQ staff in mere minutes. The INF Treaty had both sides scrapping and discontinuing future production of missiles with ranges from 500 to 5500 km, ballistic missiles as well as cruise missiles. The treaty was enacted by Summer 1991. The successful completion of the INF Treaty was the basis for seven later STARTs (Strategic Arms Reduction Treaties). Currently the members of INF Treaty include USA, Russia and USSR successor, Belarus, Ukraine and Kazakhstan.

Even though the American law draft had such a “pacifist” name, it actually talked about USA beginning their withdrawal from INF Treaty.

So the law’s main proposal was to coerce Russia to return to following the treaty, not by additional economic sanctions, but the open development of their own missile complex of the forbidden range.

This suggestion made it into the law on national defense request in a lighter form: they requested the development of a cruise missile complex with non-nuclear payloads, at least for now. The Americans keep repeating that the hypothetical development is not in violation of INF Treaties. Formally speaking, they are right, although no one is expecting USA to stop at the paper stage. It appears as though they will proclaim the “severity of Russian violations” or something like that and say that they are “forced” to leave the treaty. Obviously, during the last year, the INF Treaty was a common cause for a few rounds of economic sanctions. Announced on 16 May, Donald Trump is preparing a new sanction list, which was prepped by the national defense request, has reinvigorated the Russian media and government interest in the missile issue.

However, here I would like to put my focus not in a statement of American sanctions, but the recent The INF Treaty: The Way Forward report, done by the London-based European Leadership Network (ELN) analyst center. Its sponsors include the British MFA, NATO and Carnegie the Foundation. ELN’s current director is Adam Thomson, who was UK’s permanent Representative to NATO.

Europe’s stance, which is rather quiet today, is highly important to Russia so they listen in at every opportunity. And in the early 1970s, the European leaders were more keen on coaxing USA to base missiles on the continent to balance out the Soviet capabilities. Today NATO is showing doubt and concerns in the prospects of a new arms race, which would paint the Alliance’s European countries as the target, rather than the Americans.

The Europeans are not inclined to believe the American allegations on words alone. Disagreements on either side of the Atlantic is one of the few bright moments for Russia in this situation.

The first parts of the report handle historic background, describe the current issues and the sides stances. They are of less interest, when compared to the following predictions and proposals, however we should note a few moments. They don’t just mention, but specifically emphasize that USA has yet to provide the public with any proof of their accusations of the SSC-8 complex activation. The Russian side had been shown some “satellite images” which apparently were so unconvincing that the US are in no hurry to publish them. Although after showing them to the Russians – why would you hide them from anyone? The ELN report also notes that “…after years of persuasion, Washington has apparently convinced its NATO allies to acknowledge that Russia is indeed in breach of the treaty,” but if we recall the list of ELN sponsors, then this looks more like hint that they did not in fact convince anyone.

The report notes the American pressure on its allies: using what can only be classified as threats by US Defense Secretary James Mattis, that if NATO would not reach consensus and present a united front on the issue at the July 2018 Summit, that USA would “go it alone under a White House led by Donald Trump.”

The description of the sides’ stances notes that with the arrival of the Trump Administration, the diplomatic measures of Obama’s administration (reserved suspicions towards Russia were published before, but only reports among experts– RuBaltic.ru note) have been replaced with negotiating from “a position of strength.” The report also notes the motives of Moscow’s alleged violation of the treaty are unexplained and unclear. At the same time, they provide multiple examples that Russia’s top officials, including President Vladimir Putin, frequently called the INF Treaty “unfair” towards Russia, because unlike USA, Russia is surrounded by countries unlimited in their missile potential and possessing numerous mid-range missiles at their disposal. We must admit that the ELN expert note is true: prior to the current crisis, Russia frequently criticized the INF Treaty, even at the highest level. However, ELN notes a positive moment, that earlier this criticism was aimed at Russia’s unfair position in Asia, rather than against NATO countries, so if there were violations, their motivation was not necessarily anti-NATO.

We will not go in-depth on the military and diplomatic measures aimed at forcing Russia to return to respecting the Treaty, they are covered by the Russian media. We would like to note the overall critical approach the authors of the report have to their effectiveness and viability. In particular, the ELN experts have expressed their doubts on the US proposed “answer to INF Treaty violations” in the 2018 Nuclear Posture Review. The proposed development of a new submarine-launched cruise missile (SLCM) with a nuclear payload can’t be logically tied to the INF Treaty, and they directly say that something bigger is hidden there.

This measure is practically ridiculed by a certain rhetorical question: “Why should a new SLCM deter Russia in the future any more than the previous one did before 2011?”

It is noteworthy, that the potential “carrot” here is the limitation of the European missile defense complexes to prove to Moscow that it is not aimed against Russia.

The ultimate part of the report contains ELN’s proposals to the sides as to resolve the current crisis, if they sides truly want to preserve the INF Treaty as they say

1.                Try to preserve the Treaty through negotiation. The report says that even though this step may be seen as a sign of weakness, the side that proposes them first will show its good will and will have the approval of Europe.

2.                In continuation of the first proposal - unilateral offers of transparency. The jabs at America’s weak proof are true, but Russia also only admits the existence of the 9M729 missiles, without disclosing any information on them, aside from the fact that they fit into the INF Treaty. Any demonstration and information to confirm this would be a positive step. They propose that USA show Russian experts the declared impossibility of using the Tomahawk cruise missiles by the land-based anti-missile Aegis Ashore complexes. And they ask European diplomacy to insist on that.

4.                Put the violator on the diplomatic back foot. If the US are sure of their position then they must put forth initiatives on negating Moscow’s (the aforementioned demonstration of Aegis Ashore being unable to use cruise missiles, updating the definitions when it comes to UAVs and target drones). Accomplishing that, they would make Russia the uncooperative partner, if it does not respond with similar steps with SSC‑8/9М729

5.                USA need more imaginative and bolder diplomacy. Moving away from sanctions and threats as their only instruments. Obviously, they are not working on convincing Moscow to cease its alleged violations, if they do actually exist.

6.                If it is impossible to If INF cannot be preserved, work to make its dissolution controlled and agreed upon. The report notes that the Treaty would be beneficial for European security, but should it be impossible to preserve, it should be officially and openly terminated. Instead of “freezing” their commitments (as the American legislators propose), just flip the page. That is the only way to move forward, especially as a successor to START-III. This part presumes that the Treaty will be terminated on Moscow’s initiative, if they truly dislike it as previously stated and they do really violate it.

7.                As continuation of six, if the INF Treaty is terminated, start work on a successor, which will satisfy both sides, possibly uniting the START-III and INF Treaty successor documents.

8.                Think bigger. Even if the current crisis is resolved, the report proposes to think on the protection of the continent from cruise missiles, developing treaties on limiting armaments and nonproliferation and globalize INF Treaty or its successor.

Altogether, the experts’ proposals must be welcomed, they really are steps to preserve or even perfect the INF Treaty.

However, we must admit that Europe’s voice has less and less pleasantries and resigned naiveté. The report’s proposals are all based on the assumption that USA are interested in preserving the INF Treaty, rather than looking for a reason to leave it. Such suspicions can’t be avoided, even the London analyst center report evaluate America’s actions as “unconstructive.”

The USSR post stamp, the INF Treaty between USA and USSR, December 1987 / kolekcioner.net.ua
So, despite the unbelievability of these good intentions, the statement of them is important, when it comes instead of threats and unfounded accusations, which could have been expected, considering Russia’s traditional opinion of the West’s “solidarity.” With the stance uncoordinated with Europe, America’s further actions, if they plan to leave the Treaty, are obviously complicated. It is at least clear that it will be extremely difficult to reach a consensus in NATO on basing American missiles in Europe, like they did in 1979. Donald Trump’s latest diplomatic initiatives are obviously not strengthening the Atlantic unity. And in times when Moscow-Washington dialogue on this issue can be rightfully considered unconstructive, any friendly INF Treaty initiatives from the frightened Europe well be met with positivity. Because this will be the most efficient way to combat the West’s broadcasted image of an “irrational, maniacal and non-negotiable” Russia. This should be if not only to rain on the American “hawks” parade, who are concerned with NATO’s ranks being out of line.