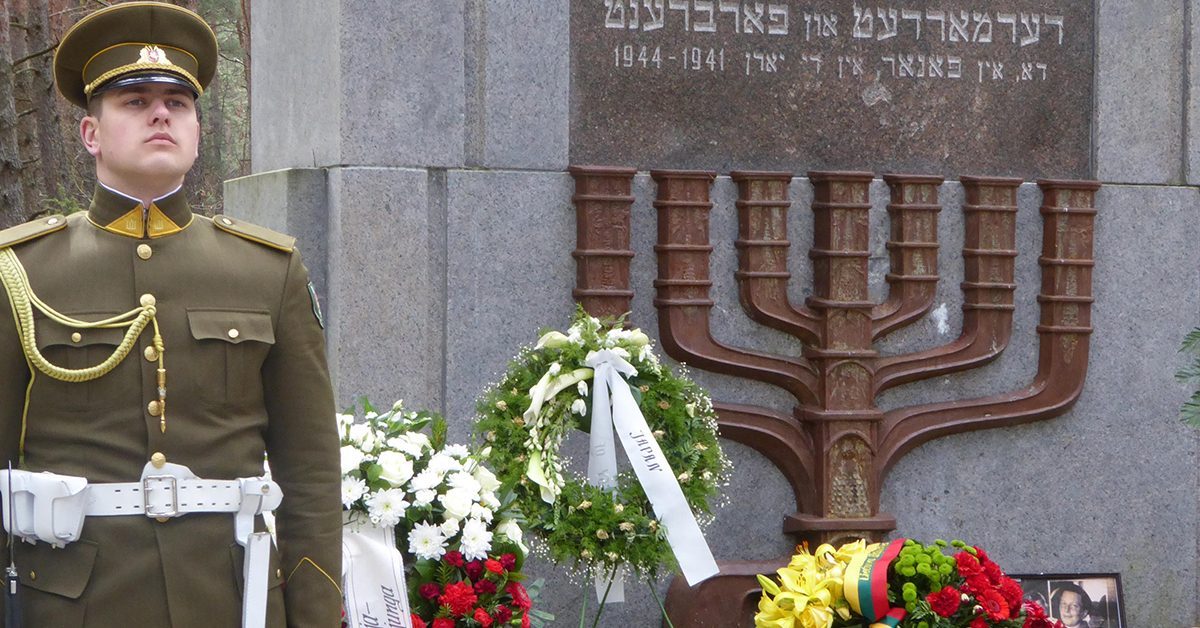 On 23 September 1943, Nazi occupation forces began the liquidation of the Jewish Ghetto in Vilnius. Later, the Lithuanian Seimas will mark this date as the official National Memorial Day for the Genocide of the Lithuanian Jews. As per tradition, the Baltic republic holds many thematic events on 23 September. Lithuania aims to show that they share the pain and tragedy of the Holocaust victims, but peculiarly, this is juxtaposed with glorifying collaborationists, who have been found guilty of atrocities against the Jews.

US citizen of Lithuanian origin Grant Arthur Gochin continues his fight against the glorification of the Nazi accomplices, with RuBaltic.Ru looking at his work before. The Genocide and Resistance Research Centre of Lithuania (Lietuvos gyventojų genocido ir rezistencijos tyrimo centras or LGGRTC) hinted that his multi-page inquiry to the head of the organization Teresė Birutė Burauskaitė may violate the Constitution and Criminal Code of Lithuania.

Gochin sent another statement to the Lithuanian Prosecutor’s office, accusing Burauskaitė of the crime of Holocaust denial. The knives are being sharpened around the infamous leader of the Forest Brothers leader Jonas Noreika. According to Gochin, from 2015 to 2018 the Center’s director actively denied the Nazi collaborationist’s part in the Holocaust. A clear example of this policy is the 26-page article by historian Alfredas Rukšėnas published in a LGGRTC journal. The article paints Noreika as a “protector of the Jews, who knew nothing and never had any genocidal tendencies.”

“Rukšėnas only mentions Noreika’s actions on seizing property, creating the neologism of “economic genocide”, thus aiming to lessen and minimize his crimes. In light of the research into historic documents, I think that “economic genocide” must be viewed as exterminating an ethnicity for economic profit.” states Grant Gochin.

Recently, Noreika’s own granddaughter Silvia Foti told the world of the effects of Noreika’s economic genocide: “Soon after the uprising, my grandfather moved our family to the “recently vacated” house in the city center and was there until he moved to Šiauliai, where he was the district chairman.” As Foti found out, this was the typical case. The Jews would “vanish”, the houses would be vacated and they were taken by Lithuanians…

Silvia Foti’s sensational confession is another trump card for Grant Gochin, who seriously intends to get some justice. He ended his letter to the Prosecution by saying, “These actions by the director and historians of the Center fit the definition of Holocaust denial, which is being committed in the name of the Republic of Lithuania, spreading propaganda with state funds. Based on what is outlined above, we request you begin pre-trial investigation of Teresė Birutė Burauskaitė for commission of the crime defined in article 170 (2) of the Criminal Code.”

On 24 August, Gochin published the prosecutor’s response on his blog. After analyzing the provided materials, the prosecution concluded that “possibly unilateral historical generalizations do not match reality” and that the LGGRTC historians’ views differ from the Gochin “on some of the circumstances.” In other words, the prosecution refused to start an investigation.

“Allow me to repeat myself, a EU member-state government is preparing to go to court in order to protect the reputation of a Nazi murderer. Citizens of Lithuania, this is how your state uses your tax money. They do this in your name.”

And Gochin makes a separate statement for his fellow Jews: “Lithuania is saying they are a friend to Jews and want to make amends. They are looking for Jewish investments and [the ability to expand] tourism and then they use that money to protect the reputation of a killer of Jews. This is how your tourist profits work.”

In August, slightly before the National Memorial Day for the Genocide of the Lithuanian Jews, another document surfaced online, titled the Baltic Movement to Obfuscate the Holocaust. It should be obvious what repulsed the author of the article, professor Dovid Katz.

Here is one of his observations: the word “Holocaust was not used in the Genocide Museum in Vilnius until 2011. “In other words, the one genocide that actually occurred in Lithuania was omitted, while the series of odious crimes that nevertheless left a vibrant and successful country with an increased population, ready, after the collapse of the USSR, for a near-term EU and NATO accession, were here being defined as “the genocide.” states the article.

Recently rights activist Giedrius Grabauskas spoke about how the history of the Holocaust was being obscured in Lithuania. On 10 September, Grabauskas and his allies from the Lithuanian Russian Union and Socialist People's Front visited the town of Merkinė. 77 years ago, the German occupation force and the local collaborationists killed 854 Jews in the outskirts of this town. But as it turns out, it was hard to find the exact location of this act in the town, a lot harder than it is to find the pantheon to their killers.

“After visiting the Museum, we went to look for the Holocaust victims’ burial site. I would like to note that we had to search for a while, just like we had difficulty finding the destroyed village of Vašukėnų in August earlier that year. It is hard to find, very few signposts are there and even when we turned the right way, we couldn’t find it from the start. There are no clear paths, everything overgrown.” writes Grabauskas.

Klaipėda city Council member Vyacheslav Titov also visited the outskirts of Merkinė, he is the man who dared doubt the construction of a memorial plaque for another Lithuanian “freedom fighter” – the commander of the Forest Brothers Adolfas Ramanauskas-Vanagas.

In the pantheon of heroes of modern Lithuania Ramanauskas is one the most important, if not key, figures. The peak of his guerilla activities was in the post-war period, so his supporters state that he never worked with the Nazis. However researches state that he took part in atrocities against the regular population, including killing the Jews of Merkinė

Titov himself is still being hounded with unending tenacity. The Municipal Council of the city of Klaipėda is preparing to take away his seat through court.

The mayor of Klaipėda Vytautas Grubliauskas called the Titov case a “long, complicated, but important process.” It will be a lesson to all “undesirables” – here is what happens to those who don’t accept the official interpretation of Lithuanian history.

The stance of the Jews living the Republic was an unpleasant surprise for the Lithuanian “patriots.” In August, the Lithuanian Jewish Community (LJC) published an open letter, where they voiced concerns with the “still emerging discussions around the commemoration of the memory of Jonas Noreika (aka General Storm).” The LJC notes that they should remove the memorial plaque to Jonas Noreika from the Wroblewskis Library of the Lithuanian Academy of Sciences. And the Jewish community called the state to resolve this before 23 September.

Surprisingly, even the American media suddenly found an interest in the figure of Jonas Noreika. The New York Times gave the article on him top billing. RuBaltic.Ru already did a detailed review of the article, whose author comes to the definitive conclusion: Jonas Noreika chose the wrong path. Isn’t this a hint to the Lithuanian comrades that they should revaluate their stance on General Storm?

The Lithuanian MFA felt the winds change: so Foreign Affairs Minister Linas Linkevičius urged his compatriots to stop honoring Noreika. It will be interesting to see how other state agencies react to his words. If they react at all.

Altogether, Lithuania prefers to tactfully ignore this issue. Obviously, the plaque honoring Jonas Noreika, the man whose own daughter admitted his atrocities, will still hang on the Wroblewskis Library when the National Memorial Day for the Genocide of the Lithuanian Jews comes along. The state is always ready to threaten public punishment on those who doubt the “heroism” of people like him. The Jewish community’s concerns remain unheard.

So what Memorial day is it for Lithuania on 23 September?